Big Sky went on wind hold with 75mph winds on the mountain so we went snowshoeing.

Believe it or not Dan has never been out on his snowshoes.  I got him a really nice pair for Christmas to entice him to go out but he’s never made the time.  Today he had no excuses.  We did Lee’s Pool again, 3 miles up the side of the mountain to beautiful views of Lone Peak and Fan Mountain.  The clouds were stacking up, promises of snow for later but in the woods we were out of the wind and once again enjoyed being out on trail. 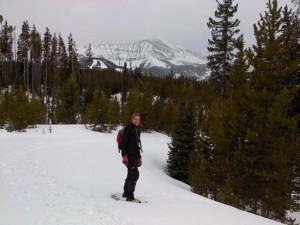 It was too cold for a picnic in the woods so we ended up at Maadison once again for lunch.  The afternoon featured a short nap with time to do some knitting.  By the time we went up to The Cabin to have a drink with Michelle at 7pm it was puking snow.  Perhaps a pocket rocket day?

This entry was posted in Uncategorized. Bookmark the permalink.